Over the past couple of months I’ve had a lot of exposure to neighbours – not my own.

I (and many others like me) do voluntary community mediation work which involves helping neighbours to resolve issues between them. It can involve anything from a barking dog to an overflowing drain to intimidation and violence to noise. Noise is a regular source of conflict between neighbours, particularly in urban or built-up areas.

Local mediators are giving up their time to provide an enormously valuable service to the community which not only benefits the neighbours themselves but also the Courts, an Garda Siochana, County Councils and ultimately the tax payer.

Conflict is inevitable and it exists between neighbours just as it does within the family, in the workplace, in business transactions and in the world at large. Neighbourhood disputes are fertile ground for mediators seeking to practice their skills.

Managing conflict is something that we are all pretty bad at – in fact we are ‘wired’ to be bad at it. The primeval ‘amygdala attack’ that I suffer when in conflict removes my normal rational thinking and replaces it with emotion. Someone has threatened, undermined or damaged my values, my needs or how I see myself – and I am in conflict!  Emotions can be very raw – as we all know.

A couple of Saturday’s ago an elderly lady (who was complaining about her neighbour playing his TV too loudly late at night) explained to me and my co-mediator that she couldn’t sleep and her life and health were in tatters. Objectivity is an important part of successful negotiation, so my co-mediator went next door and turned up the TV to a level that was just too loud to have a regular conversation. I could barely hear it from within the elderly ladies living room and I told her so. She said she had supersonic hearing and it wasn’t her fault that she could hear it. She insisted that the young man be banned from playing his TV at all. I asked her if she ever has friends or family around. “Sometimes”. I asked if she would be prepared to tell her visitors not to talk when they came around, as that was the same volume level the TV next door is being played at. “Don’t be ridiculous, that’s not the same”.

In conflict we tend to get entrenched in our own position and lose sight of the other person. A critical element in conflict resolution is to get opponents to alter their view of each other or at least to acknowledge that their own view may not be absolutely accurate – that they may be assuming something that is not (f)actually correct. When in conflict we make assumptions – those assumptions are invariably negative but also invariably wrong.

A very wise Catholic priest once taught me (from his study of Theology) that in times of trauma we automatically default to guilt and blame. In conflict you regularly hear that the other guy is always to blame. Just look at the latest spate of Public Sector Union disputes which are brought to us incessantly by the media. When have you ever heard anyone seek to understand the other side’s position? It all plays out in an ‘all too familiar’ pattern – there’s that word again!

So I asked the elderly lady “What have you done or could you do to be a good neighbour?” She seemed perplexed by the question because she wanted her neighbour to carry the can and accede to her (what seemed unreasonable) request. The young man next door offered to limit the volume control to number 5 on his TV (which was really low) but it wasn’t enough for her. She informed me that her next move is to write to President Higgins and An Taoiseach to get the neighbour evicted!

Later that same Saturday I went to Roscrea to attend the posthumous launch of the third book of author and poet John Quealy (my father-in-law) who died a few years ago. Some of his family from far flung County Clare also turned up for this auspicious event and one of his poems was read out. I couldn’t believe – it was called “Neighbours”. 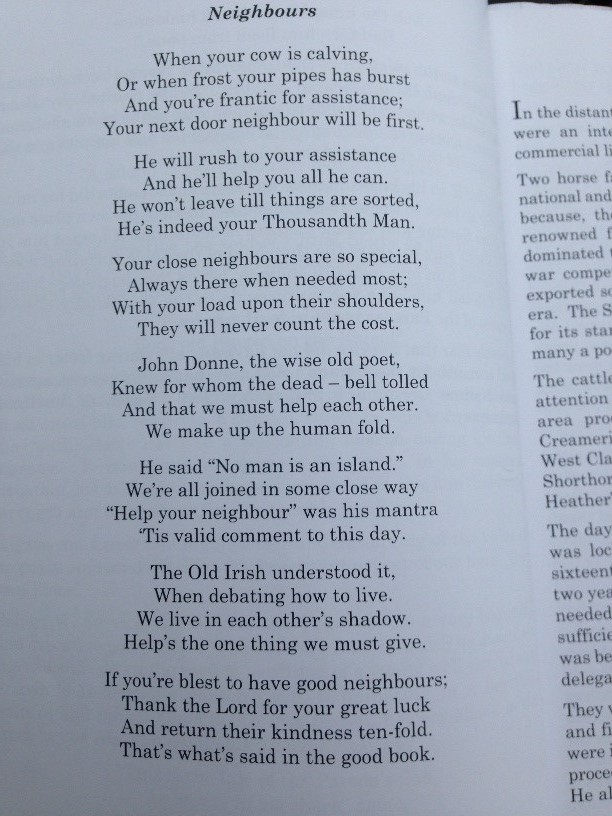 PS Some weeks later the elderly lady called me to see what was happening. I asked her this time “What do you think you can do to make your own situation better?” Again, guessing she was perplexed, I asked if she liked Lyric FM. Her own house was deathly quite so I reckoned some of her own music would easily distract her supersonic hearing.  “Yes, but only when the music is soothing”. I told her I would send her something. I dusted down an old CD with Pan Pipes playing the Best of The Carpenters and sent it to her in the post. I haven’t heard back ….yet.

Any cookies that may not be particularly necessary for the website to function and is used specifically to collect user personal data via analytics, ads, other embedded contents are termed as non-necessary cookies. It is mandatory to procure user consent prior to running these cookies on your website.